THE BEGINNING – TALKING BAO YOU

There’s always a little something special arriving at Little Bao.

It started as a solitary space situated in a corner space of Soho. Two parallel communal tables, one parked against the wall and one forming the bar exudes simplicity from a lone glance. With a menu to be boasted about arranged as placemats for ease of ordering, its interior décor is noticeably steeped in Hong Kong’s quaint local history; a visual ballad devoted to our everyday, traditional café 茶餐廳 (chàh chāan tēng).

This culturally-inspired reverie hosts the iconic hawker folding-chairs fashioned into barstools atop gleaming floral-patterned mosaic tiles with metallic napkin holders stationed precisely where needed. Skating past the familiar glass-panel doors you are drawn by their indescribable atmosphere, already palpable from the first engagement with your server to plodding onto your appointed seating in-between your temporary culinary companions for the evening.

A telling sign absolving any doubt on how bao-down good the food is here is the replenishing assembly willingly outside for a 45-minute wait in the summer’s heat just to clamour for a seat. With limited elbow room all considered, Little Bao’s very patrons are consoled by the variety of small plates accompanying grander conversations.

By far, these are the genuine moments above the rest.

A street food staple during childhood, my sources now hail from the wet markets and my tastebuds have grown to prefer cuttlefish balls with a coarser texture rather than a smooth paste. Its distinct flavour is more prominent for those who truly savour seafood’s salted umami profile. This dish is no exception with an encrusted seaweed exterior and peeking golden-browned coating – the cuttlefish ball is remarkably tender but with low elasticity, allowing for an easy bite that accentuates the outer crunch. Not only rich in essential minerals, the crisp seaweed coating has a rich and complex nutty flavour profile and is the first to punch through making the secondary cuttlefish flavour difficult to distinguish. Harmoniously paired with their black garlic dipping sauce, its pungently decadent sticky-sweet umami aftertaste is predominantly attributed to black garlic’s three-week fermentation process to produce a savoury profile and consistency similar to aged balsamic vinegar with hints of syrupy molasses. 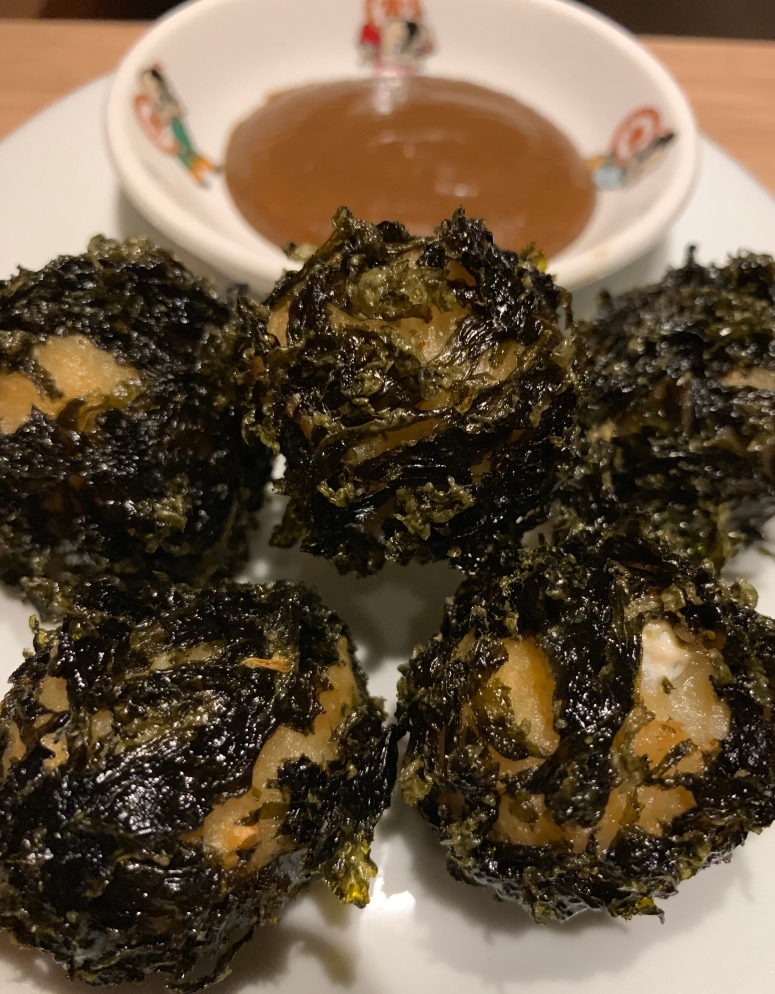 There are two distinct camps where Brussel sprouts are concerned: amorous adulation or regurgitated revulsion. Seemingly, there’s no grey area found in-between. Bitterness found in cruciferous vegetables indicates dense nutritional value that goes unnoticed and is avoided by young children and adults alike due to overcooking and under-seasoning. When sliced in half, seasoned liberally and brushed with olive oil to be pan-fried, Brussel sprouts have a wonderfully charred, smoked nutty flavour. My only critique would be for the Brussel sprouts to have been left on the fire a while longer to crispen. Tossed together with freshly sliced thin chillies, peanuts and lime juice, these ordinarily bland Brussel sprouts transformed into a texturised and tantalising enigma. Drizzled to finish with an intensely fragrant fish sauce caramel, the mixture is a slow-cooked combination of black vinegar, palm sugar, water and like its namesake, fish sauce. The result is a full flavour profile comprising of sweet, salty, bitter, sour, acid, spice, nutty and pungent – coincidentally, this balance of flavours is brought forth in Szechuan cuisine.

Given the prior two starters, these golden, crimped parcels were regrettably underwhelming. Plated as a one-bite amuse bouche, its medley of flavours is undoubtedly alluring in isolation, but may lack a cohesive follow-through. Though the wonton skins were an enticingly crisp golden-brown, it was a few millimetres too thick, rendering it a labour-intensive endeavour to bite through and savour the tender, succulent shrimp paste within. The homespun avocado puree was sizeably petite, only further accentuating the dry, oily nature of the deep-fried wonton. Lastly, the chilli-infused pineapple salsa, though theoretically an interesting contrast of flavour, was fairly disappointing as the Szechuan chilli did not come through, and would have been a married match to the pineapple’s tangy sweetness. 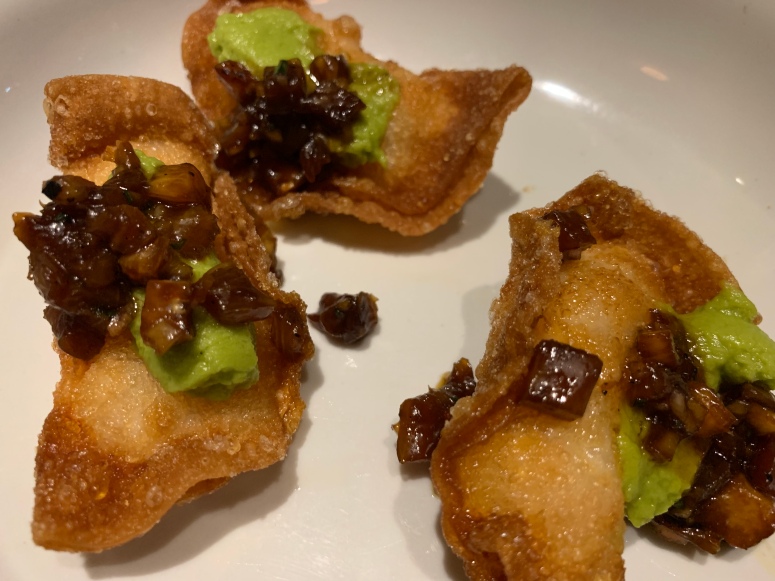 Be forewarned, lovers of hot sauce. Those who enjoy exploring the perilous journey undergone for hot sauce smothered fried chicken…we braced ourselves for a spice-to-tang ratio equivalent to sriracha. This seasoned, homemade batter more resembled a mild peppery, satay coating both flavour-wise and texturally. Do not be disheartened by my words or assume otherwise, as this fried chicken was a just savoury sensation setting our taste buds alight. Paired with lightly pickled cucumbers to combat the inevitable oncoming of yeet hei. A noble and tender garnished gesture.

THE END – A PALATABLE PROMISE